The left vs. the right brain!

On the Right and Left Brain. There Is No Cure Without Their Unity.
(click to access)
I love your Reflections because they guide my thinking in both my brains and stimulate both. The output has become a new understanding, access to feelings (including music) and a better balance between my emotional and intellectual intelligence.
Having read your Reflections of “no cure without unity between our brains” I have spent the night in a state of dreaming/thinking and putting words on how I during five decades found a way to establish my communication between my right and left brain.  What I have reached is not a state of exaggerated euphoria, but one of sanity. It has taken 50 years and in my dreams this night I have been zooming in and out of four stages/periods of my life, which can be described in the following way:
1963-65. The years in the “Spirella-bunker”.
1978-80. 2 years spent in LA (with its serotonin heightening sunshine) and Colorado with Primal Therapy and Rolfing.
1996-98. Going through a burn out. Homeopathy. Drastically changing intake of painkillers.  Going into my epilepsy/birth feelings.
2009-10. Leaving neurotic relations and struggles and creating a new well being.
By creating circumstances which, at different periods of time, allowed me an equilibrium between the intake of food, medication, daylight (!!) intellectual and emotional activities and neurotic (unreal/painkilling) activities, I have achieved states in which my body and brain (on tree levels) allowed me to relive imprinted pain and gradually improve my connection between what you pedagogically describe as the right and left brains.
It has taken 50 years to achieve an understanding / awareness; however, I have been guided by intuitive, sub-conscious understanding which I have fed with your articles, books, treatments, intuition and leadership/guidance plus another additional help. I have often said that I have been lucky, and that is true, but the biologic, evolutionary, innate programming in my body and brain(s) has been given a fair chance to react. A reaction which in a coherent manner, with the help of luck and skill, has given me my highest satisfaction: To start to understand myself with my strengths and shortcomings!
I will try to write down my experiences of my four stages during a few weeks to offer an alternative way to cure pain and neurosis. I believe what for me has taken 50 years can be done during a considerable shorter period of time!
"Traveler, there is no road; you make your path as you walk" Antonio Machado
Jan Johnsson
Posted by Jan Åke Johnsson at 10:08 PM 0 comments

A Merry Christmas and A Happy New Year!!! 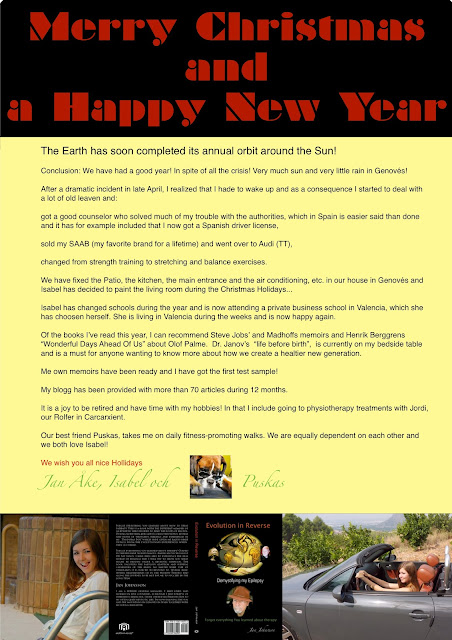 Posted by Jan Åke Johnsson at 8:23 AM 1 comments

The Wisdom of a Dream.

In my dreams, I resolve my problems and conflicts, or at least I work on them. After having been through Primal Therapy over four decades and having lived a lot of the pain, which was imprinted during a horrendous birth process, my dreams during the last couple of years have changed in different ways. They are still about getting stuck, not finding my way, being isolated and not understanding what is being expected of me. However, nowadays, in a dream, I can feel the reason, often all the way back to my birth. When I reach this stage, I dare to stand up and explain how I feel, and can ask for explanations about things I don't understand, which are confusing me.
During the spring, I had a fascinating dream. It was a realistic and positive dream, filled with music and good feelings in which epileptic cramps were understood. In the dream, I was singing like Nat “King” Cole and at the same time going through hallucinations of various kinds, both painful and pleasant. Often, my dreams have been about how I was scared of losing my job, which I was supposed to perform without understanding what was expected from me!
Last night I had a dream of this kind, when the people, I worked for disappeared most of the time giving bad management and unable to motivate me but still expecting good result and simultaneously looking for my leadership and initiatives. It went on for a while, and I could feel the pain. Suddenly, I said stop and asked the people to explain to me what this was all about, to understand that they were responsible, and that they had better instructed me than be running away.
All at once, I asked them if they knew what it takes to be able to feel pain? If they, for example, knew that somebody in pain is scared to death to let her/his pain out if she/he is worried to lose her/his job so that she/he cannot support her/himsself or her/his family? Art Janov, I said, could do it because he became economically independent after his pyramidal success with his book “The Primal Scream”. Never more he had to worry about food and shelter. He could live his dream, like John Lennon and Steve Jobs, which both became economically independent of a young age. They had all the subjective well being which Abraham Maslow is talking about in his Hierarchy of Needs, to realize themselves.
In the dream, now I felt I had one answer to why so few are interested in asking for my experiences regarding Primal Therapy and Evolution in Reverse. They are too scared to lose what they have which on different levels give them food and shelter.
First when I woke up, I felt confused. It confused me because I had no one to talk to about my dream, and because I am aware of the fact (especially in Spain) that we are living in a time of crisis when so many are constantly worried about their job, survival, family. Many are far from Maslow’s subjective well being, which is necessary to be able to feel what is behind their anxiety, pain and/or intake of anxiolytics. Though this is, might be, the adequate moment to do it.
When the confusion left I decided to write down my dream.
Jan Johnsson

Pain by inadvertence or negilence

Janov's Reflections On Pain by Inadvertence (click to access)
Art,
Reading your words: “It was not what my parents did, but what they did not do”, I got icy feelings over my entire body; I was taken back in time, and I could feel the memory of the emptiness from my youth when my parents were waiting for me to provide comfort, when it should have been the other way around. After I have felt a lot of pain over the years, the more I have realized that both my parents were unhappy “kids” who never had got the love they needed.
An interesting proof of the continued existence and strength of the feelings is that the sentence; “It was not what my parents did, but what they did not do”, in a written, foreign language stirred up the latent memories of being unloved. It was not my parents intention, but they never had anything else than their own pain, so I always had to fantasize about being held and caressed, followed by other neurotic behaviors, in order to survive.
Whenever, nowadays, I tend to behave with icy feelings towards my daughter, I can fortunately feel it, and I can often tell her how stupid I act, and we can talk about it and give each other hugs!
Jan Johnsson
Posted by Jan Åke Johnsson at 2:42 PM 0 comments

There is a book on its way 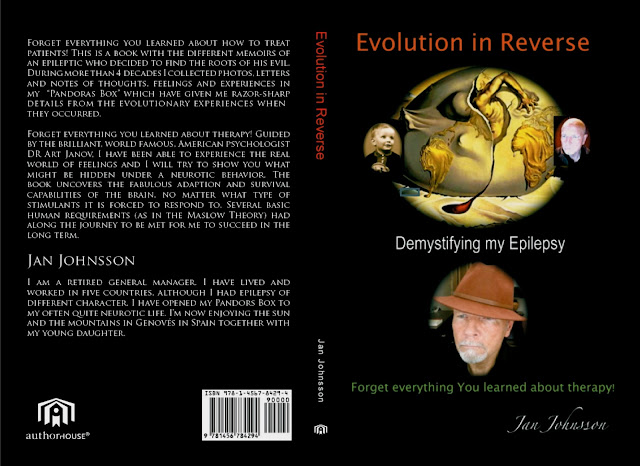