During a few years, I have let my feelings and experiences related to Evolution in Reverse be reflected in my blogs. Often, my inspirations are taken from Art Janov’s Reflections in combination with emotions - “down up” in the brain - that has been triggered by the current situation or of a dream. In addition, authors like Marcel Proust, Simone de Beauvoir, Alice Miller, Malcolm Gladwell, Georg Klein, etc. have stimulated my thoughts and feelings about what is happening in my body and brain.

Because I, in my career, worked as a leader and consultant in a number of commercial and industrial enterprises / groups and I had a special focus on crisis and changes, I have, out of curiosity, continued to deepen my knowledge in this area. Then I have obviously been heavily influenced by my experiences from the Primal Principle and the knowledge that Art Janov passed on, about psychotherapy, psychology and neurology, most of which he collected from his patients’ experiences and research reports in Neuroscience.

In recent months, I have thought about the similarities and differences in the success of the methods within my therapy treatment and my professional career. They are seemingly two separate worlds. However, it is, in both cases, fundamentally about people, relationships, trust, security, hormones, oxytocin, abilities, ambitions, shelter and food for the day. There ought thus be infinite connections / similarities between the practices which the business sector (CEOs, managers, change consultants, etc.) and the therapy institutes - like The Primal Center - (therapists, psychologists and psychiatrists, etc.) are using. Both worlds aim to solve / cure personal and / or organizational crises and create a safe, caring and trusting environment. This approach has been reinforced by my history, where I managed to combine a role as a successful CEO and change consultant while simultaneously successfully undergo psychotherapy and physiotherapy treatments. This took place over many years, and I was lucky enough to rid me both of my neuroses and my epileptic stigma.

Timidly, I have on a few occasions asked Art Janov to develop his therapy organization and his responsibility. That way, he might have succeeded to break the isolation and doubt which the therapeutic / educational / research authorities are having regarding the value of the Primal Therapy as a curative therapy. My, in vain, rendered comments have, as a start, dealt with questions about counseling, etc. and initiation of collaboration with other natural therapies. Later I suggested doing a consulting project on a voluntary basis in order to develop a more transparent and trust-based patient / therapist relationship, but, unfortunately, without success...

I have found it difficult to visualize and verbalize the introspective self-sufficiency of Janov’s Primal Therapy. This incapacity occurred despite the fact that I often as a manager / consultant, inspired by PT, had to resort / introduce unconventional methods that often focused on creating confidence when emotions, fears, old paradigms had created inhibitory deadlocks. I was intuitively better at practically dissolving a hormone-charged stalemate in a corporate organizational crisis and get groups of people to collaborate and get the oxytocin flowing than I was, intellectually, to understand inefficiencies in the development of PT as an internationally well-dispersed therapy.

Research in Neuroscience has, in recent years, accelerated extremely fast and with the help of modern resources and job aids (supercomputers, networks, MIR, etc. etc.) research reports have emerged which, according to Janov, show conclusive evidence for PT’s validity. I’ve found that skillful change / behavioral consultants have adopted the results of the aforementioned research in Neuroscience and have introduced change / development models that I had wished were available during my active years as a consultant / manager. Eg Dr. Judith E. Glaser wrote an excellent book on the subject called “Conversational Intelligence”. It is all about building a transparent emotional confidence according to a model that I have not previously experienced outside Dr. Janov’s Primal Principle.

When doctors, psychologist and scientists present a symptom, Dr. Janov is often irritated that they avoid to asking the question “WHY?”. However, Dr. Glaser asks in her organizational analyzes constantly “WHY?”!! It is the leitmotif of her change at all levels down to the individual’s emotional arguments and reactions. Dr. Glaser works primarily with organizations that for various reasons stopped working. Her approach is to, as far as possible, dissolve fears, neuroses, negative interpretations, etc. so that political and / or power-based groups, change their behavior and develop each other emotionally equally and become WE-oriented, but that they still retain and improve their I-worth.

An important part of Primal Therapy has been to guide patients to develop their ability to establish a healthy communication between the brain regions. The development, this communication, creates an intelligence where emotion and intellect gets a comparable status. For the few with unlimited time and unlimited resources, to re-live imprinted pain, presumably this evolution takes place according to the Primal Principle by itself. With Judith Glaser’s “Conversational Intelligence” a model has been developed that has high potential to bring individuals, groups and organizations much faster in this direction. Allow me, cautiously, to suggest even groups in The Primal Therapy in this potential. It is fascinating to follow Judith Glasers change journey through a number of identified and sophisticated organizations that have undergone severe crises. They have managed to escape from hormone-fueled horror scenarios and turn themselves into oxytocin flowing successes with motivated individuals who act on a new, previously unknown transparent level.

http://wn.com/conversational_intelligence_with_judith_e._glaser
Posted by Jan Åke Johnsson at 6:59 AM 0 comments

Scientific Explanation of Evolution in Reverse.

Researchers at Yale University on their way, scientifically, to explain evolution in reverse. http://www.sciencedaily.com/releases/2014/04/140422113430.htm. http://news.yale.edu/2014/04/10/yale-researchers-search-earliest-roots-psychiatric-disorders.

Being a long term Primal Therapy patient / practitioner, I feel enthusiastic and am relieved about the identification of the molecular mechanism in the prenatal brain. Identifying this may help explain how cells go awry when exposed to certain environmental conditions. By identifying many risk factors, the researcher detected the gene that may be linked to neurological problems. “Different stressors may have different stress responses”. They examined risk factors specially involving epilepsy, ADHD, autism and schizophrenia. They expressed hope “to provide therapy in the future to reduce the risk and protect vulnerable cells”.

Having been involved during the development of Primal Therapy (from a “quick-fix” to the process of re-lived pain during years and decades) for nearly half a century, PT has, for me, developed through experience to a lifestyle, finally to become an identity. Through a series of extraordinary coincidences, I happened the intuitive genius of Art Janov. He realized in the late 1960s, unscientifically, how psychological and neurological contexts were rooted before, during and just after birth. With this background, he identified accurately the Primal Principle and defined Evolution in Reverse. In fact existed thus, already then, the new treatment paradigm that had the potential to take psychotherapy out of the deadlock that cognitive therapy has continued to create. However, it would take nearly five decades before the scientific world seems to have caught up with Art Janov.

It is easy both to understand and feel for Art Janov´s many disappointments and impatience when it comes to achieving recognition from official bodies for his ingenious innovation. Lack of recognition and attention from both the neurological, psychological and other related circuits, in several respects, hampered the development of Primal Therapy. Due to self-inflicted inexperience, the stagnation did not became smaller because of the questionable hip character that followed “The Primal Scream’s” best seller edition. In the eyes of too many, PT became a fashion therapy, often in the hands of inexperienced, fortune-seeking boobs that caused permanent damage.

As a patient, I have survived and have been given a new outlook on life thanks to Art Janov’s guidance. It used to feel difficult and incomprehensible that almost everyone in an international environment (who consider themselves intelligent, well-educated and experienced) are reluctant to the general value of my achievements and my documented stories about my Epileptic Journey. The journey has to all parts followed the Primal Principle and Evolution in Reverse.

The research results which have been presented by Yale now feels as natural to me as when I after 53 years met my soul mate from adolescence. Now I can talk about my experiences with someone who happens to have a natural feel for interpreting both research papers and bottom-up information in the brain. Our fellowship eliminates naturally the old inhibitions in our thoughts and behaviors.

The Primal Principle is our future as well as the future of research. And to all whom it may concern.

Thank you for your letter.
This is a well thought out and well written piece.

My best,
Dr. Arthur Janov
Posted by Jan Åke Johnsson at 10:26 AM 0 comments

Our Indefatigable coordinator Is Dead! 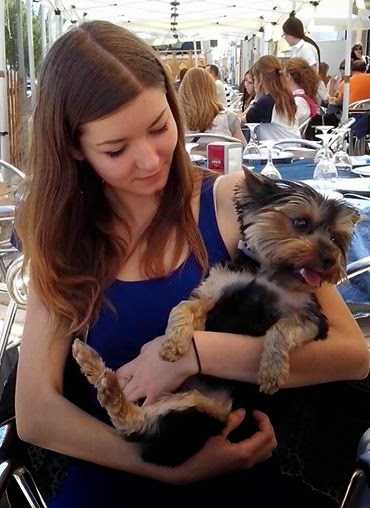 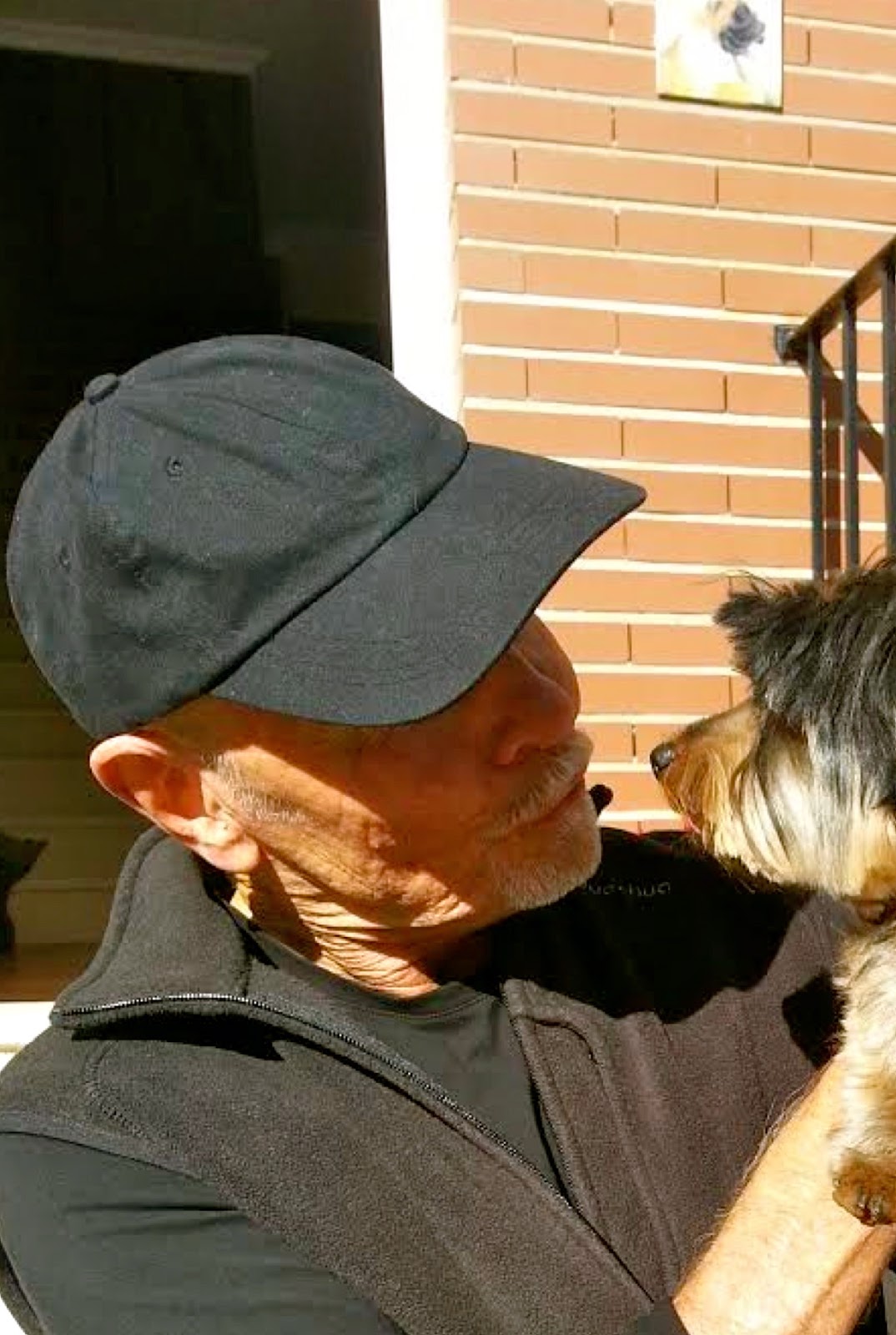 In his credulity, he fell victim to a jealous Pit Bull. His suffering was short. The loss of his contagious joy, of which he had plenty, sufficient for everyone, feels heavy. He is buried in his favorite spot among the orange trees in front of our house.
When our tears have dried, we see who can fill Lionels position. Without a dog, we cannot be.

Isabel and Jan
Posted by Jan Åke Johnsson at 10:38 AM 0 comments