You make me feel intelligent!

Posted by Jan Åke Johnsson at 2:44 AM 0 comments 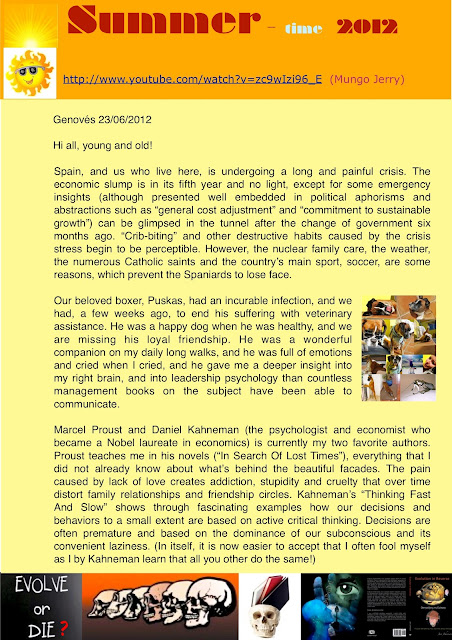 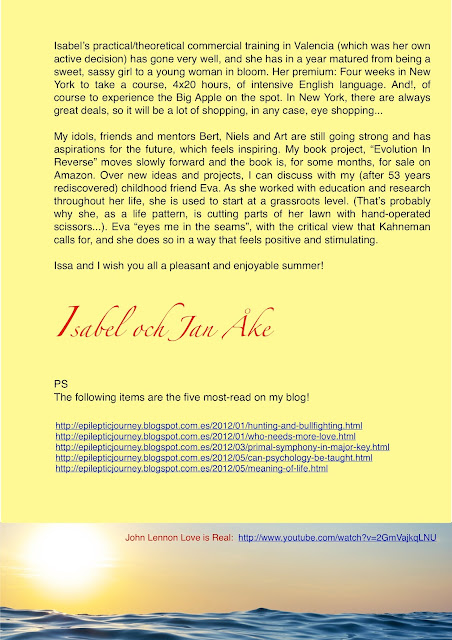 Posted by Jan Åke Johnsson at 3:31 AM 0 comments

Psychology and Ideology.  By Peter Prontzos (6/6)

You have been focusing on important and mostly unconscious factors able to shaping ideologies and behaviors which are problematic and potentially dangerous. This leads you to conclude that “crisis such as war, poverty and global warming can never be solved if we continue to be at the mercy of such forces”. I would like to mention that I had never succeeded to go to Primal Therapy and to be successful had it not been because of a severe personal crisis.
The general fear of crisis is a two-edged sword. The terrible wars / economic crisis, during the last 150 years in Europe and America, led to huge leaps in progress. The industrial revolution multiplied time and again the development and has, despite an unfair distribution, by all available measures reduced the trend of the average global poverty. As a consequence of the digital revolution (comparable to a mini-Big Bang with all its own mini crisis) we are witnessing a new democracy painfully being born. This has quickly led to and will continue to lead to a new direct democracy through an infinite number of super fast social, international networks. Many of these changes are bound to create a dramatic crisis (political and economic), which the evolution, in its deterministic ambition will create solutions for.
It is interesting that all your compassionate, rational and liberal opinions and immense knowledge make a leap, of some 2500 years, backwards to find explanations and understanding of humanity like the Plato’s “zoon politikon / political animal”, which can be defined as: “A certain “ratio” of political animals is capable of ruling. A larger “ratio” are capable of being ruled. A certain “ratio” is farmers, shepherds, pottery makers, cooks, mathematicians, military strategists, soldiers, fine artists, politicians, philosophers, etc. etc. So in that sense of varios RATIOS of human beings specializing in different jobs, man is still a “rational animal” as well as a “political  animal. All human beings specialize in a huge diversity of complementary activities when they go beyound the state of mere self-sufficiency (hand to mouth existence) and grow into the fullness of their nature, according to Aristotele, which is to be city-building and city-dwelling animals.”  Turning to the historic Greek model of civilization might be considered as a version of “Evolution in Reverse”. However, it may be even more difficult to apply correctly than the version being defined in Primal Therapy.
Thank You for six inspiring and challenging articles and for mentioning Kahneman. I want to paraphrase him by saying: “That the test of learning human belief and behavior is whether our understanding of the new, provocative situations we encounter has changed, not whether we have learned new facts”.
Jan Johnsson
Posted by Jan Åke Johnsson at 4:59 PM 0 comments

The Betrayal of Intuitive Skills.

Psychology and Ideology.  By Peter Prontzos (5/6)

The Betrayal of Intuitive Skills.

Arts major contribution to humanity is the Primal Principals based on Evolution in Reverse. This principle will be a successful method if we can feel, relive the wordless pain (which at one time - before or shortly after birth - was unbearable) that evolution, using a variety of physiological and psychological filters, repressed. We may eventually become independent of the filter in the form of neurosis, drugs, phobias, anxity etc. and no longer be driven/ propelled by the unconscious pain..


To dig and find information in the classical psychology leads almost always  to dead ends because it is dealing with cognitive adaptation to the surroundings and not to our unique, individual needs. For my personal part, Art's unhesitating stance, in favor of evolution, has led him to his, although numerically limited, treatment successes, which in turn has given him an unwavering opinion toward the cognitive corps of therapists, who often led by their own pain “help”/push their patients to repress their pain even deeper. The evolutionary survival force is so strong that, also in its extension, the psychological literature, academic educators and the media watchers broadly denies Art's innovation / development work which, by its genius and by being excellently documented, is available to anyone.

After your first three articles, I had continued high expectations of the analysis that explains our policy choices and responses that are an important part of our social world and everyday life. Not least, I was encouraged by your reference to Kahneman, the psychologist who became a Nobel laureate in economics. His fascinating analysis of our lazy intuitive way to draw conclusions, I had hoped would be your leitmotif in the explanations, given where the articles are being presented, would dam up to a major accessibility of Art's principles. Unfortunately,  many of your confident examples confirm Kahn's investigations.

When you say “that Kahneman notes that people tend to assess the relative importance of issues by the ease with which they are retrieved from memory”. These people are, however, not the ones that scare me (they might change opinion tomorrow) at the same extent as the professional specialists. According to Kahneman: “ The clinical psychologist, the stock picker, and the pundit do have intuitive skills in some of their tasks, but they have not learned to identify the situations and the tasks in which intuition will betray them. The unrecognized limits of professional skill help explain why experts are often overconfident.”)

Behind most of your conclusions live evolution and unlike the creation story it is, for our survival in the long run, more rational. So to understand many of your conclusions, dealing with public attitudes that are important for human interaction, so we also need to understand evolution. It is about an exceptional strong selection pressure exerted by pathogens and parasites. Lajos Rózsa: "The human brain is particular vulnerable to infections, thus cleverness is an ideal character to signal heritable genetic resistance against infections. In it's historic perspective, human preference for intelligent mates is to increase the offspring against pathogens.

Among other phenomena, this hypothesis can explain why humans enjoy wasting most of their intellectual capabilities for totally useless purposes, why prehistoric humans developed brains that made them potentially far more intelligent than required by their physical environment, and why we experience a continuous increase of human intelligence even in modern societies.

We should give up claims in the classroom that studying algebra or poetry or whatever will help pupils becoming more successful citizens, workers, businessmen or politicians. They already know that it will not. On the other hand, however, keeping in mind that individual cleverness is extremely beneﬁcial for the society as a whole; we should still urge people to study. And it is easy to do so; just tell pupils that cleverness is sexy.”

Whether we have a broad range of cultures and that the behavior differs in the virtually endless, it is the same evolutionary conditions that have developed our basically rather similar social patterns. This confirms, inter alia, Kahneman in his testing and research in different cultures, and in radically different contexts. Art's has in the Primal Therpy had patients from many different countries and cultures and I have, until now, not heard that "Evolution in Reverse" has more than one interpretation.

Psychology and Ideology.  By Peter Prontzos (4/6)

First of all thanks for a rich presentation of different reasons for our political norms and their potential deriving from the parenting style we grow up with.


Allow me, however, to rise a number of doubts as to your well-meaning conclusions, not only where we end up spread across the political spectrum, but how this, then, conditions our decisions. After having made a life-long journey that has given me insights into family circumstances in different western cultures like the U.S., Germany, Spain, Sweden and France, I cannot  associate myself with your conclusions.
For example, the analysis of 88 samples from 12 countries (according to Kahneman one sure way to draw false conclusions of small samples!) I easily disprove with examples from families with a broad range of different political affiliations. With that I would not say that I have a truer picture than you, I, just, want to show my skepticism.
After that I, in my lifetime, have experienced the unfolding of the Watergate scandal (and been able to follow initiated analysis over decades), how a party ruled by power-hungry psychopaths think and act in order to manipulate potential voters and the world outside the U.S., a thin psychoanalysis feels unsatisfactory.  It requires other aspects, than just parental derivates, to understand the plots that were exposed both during the 9/11 attacks and, later, the subsequent conspiracy hidden in human grief and fear.
George F. was a repeat, suspiciously like, something that America had experienced before, when Harding through false advertising was matched up as president. In George F.’s case, there were dictatorial manipulators in the background who ruled within economics, warfare, weapon’s production and control of oil resources and isolationist arrangements. They knew perfectly well how to exploit the fear of a former son of an Arab oil family.
The deterministic evolution is driving the “owners” of the United States and their political minions into a ruthless battle with the dictatorial China. Europe  will, after the current economic crisis, be forced into a pattern similar to the American. That is my intuitive opinion.
Art has revealed interesting things about evolution. Among other things that it is developing imprints for our survival, which are hard to erase, and it does not take a lot into account the quality of our individual lives.
Jan Johnsson