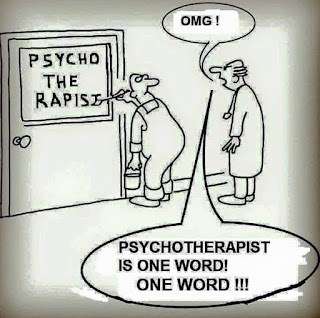 To Rape The Psyche (The Human Soul, Mind, Or Spirit).

The other day, a female fellow patient published the above cartoon in a patient blog. It was by someone regarded as hilarious = extremely amusing. As I have seen the play with the syllables in the psycho-the-rapist a few times, it tore up memories and feelings from near and far, with many common human traits in the European, Latin, and American environments I lived in. Just to mention a few of them:

A long time ago, there was a beautiful girl who seemed obsessed with sex. She wore out a number of good-looking guys while she still lived in her parents' house. When she left the home she suffered from depression and started going to therapy. This helped for a time and she felt better until she had seduced / let her be seduced by the male therapist. Around the same time, she fell in love with a married man, who out of consideration for his wife did not want to have sex with her. This drove her into a deep depression.

After a while, she came in contact with a female therapist. The therapist herself had lived through how it felt to be severely abused as a child, but later received help to get beyond her suffering. After working with the female therapist for more than a year the gates to the repression opened and it became obvious that the repressed trauma occurred when the woman was between 6 and 10 years of age. The father then had abused her sexually. It was this mental pain she constantly acted out.

When my father beat me up badly when I was 9 years, the most painful was not that he hit me blue and bloody, but that he tried raping my psyche and forced me to ask for forgiveness. When I uttered the words “forgive me dad", I experienced the worst pain of my 75-year life. To re-live this pain was a crucial experience to later re-live my birth trauma. The sum of these experiences of being raped made it later possible to live a life of self-development and to make my own journey through life.

Because of a nervous fingering, the woman, who published the above cartoon, sent it by “mistake” to my computer. Because I know her for several years, I reacted and pointed out to her that I did not think it was very funny. Then she changed her mind and her suffering welled up as well as her anger and anxiety towards the therapy center, where she was in treatment. This anger over poor treatment to unwarranted costs pursues her daily since a very long time. She feels destroyed, raped and abandoned. How raped she feels, in general, she showed when she said that I too had conceptually raped her when we at some point had discussed a visit to Spain, which she had interpreted would be at the price of sex. However, I had pointed out to her that she should find her therapy support somewhere else because I might be a too easy victim for her obsession, sexually, to seduce her therapists.

My conclusion of the published / above cartoon is that there are few healthy, liberated, cured, experienced psychotherapists who can be trusted and in whose hands you can put your life. Their trustworthiness is limited to the degree at which they have re-lived their own pain.

I never saw the cartoon as the joke it might have been, I saw it as an act out from my friend!